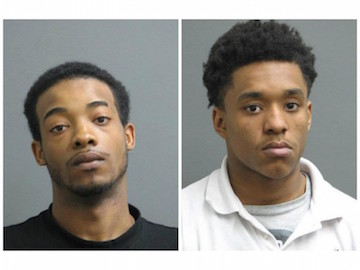 The two men involved in a March 15 Oak Park car theft have been identified after further investigation by the Riverside Police Department.

Amir J. Johnson, 19, and Darien L. Jones, 18, have been charged with felony auto theft, according to Riverside police. They have been identified as the two men who stole a car around 10 p.m. on March 15. The theft took place at a gas station in the 7100 block of West Roosevelt Road in Oak Park, where the owner of the vehicle left the car running at the pump. One of the men entered the gas station store to distract the owner while the other man drove away in the vehicle. Video surveillance from the gas station captured the car traveling southbound on Harlem from Roosevelt Road, said police.

A couple hours later at around 12:57 a.m., a Riverside officer reported a car driving recklessly on Ogden Avenue and Lionel Road. When the car showed up stolen, the officer turned on his lights and siren, which led to a police chase. Johnson and Jones ditched the car while it was still moving on 45th Street. The car rolled back and struck the police vehicle, causing minor damages.

Forest Park canines searched the area for the two men, with no luck. Further investigation by the police revealed that the two men had called a local cab company a few hours later requesting a cab from Lyons to Maywood. The two men were then located and arrested on March 22.

Jones has one prior arrest for a traffic offense while Johnson was out on bond on a felony burglary charge from a 2015 pending case. Johnson’s bond is expected to be revoked as a result of the new felony charge.