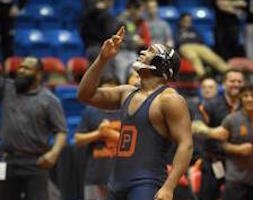 “I didn’t want to wrestle,” said Garner, “but I knew my brother wouldn’t have wanted it any way else.” Garner secured an 8-5 victory over Marmion’s Matt Ferarro at 182 pounds. Kendale McCoy and Gabe Townsell also had pivotal wins for the Huskies (28-3) against Marmion (27-6). A series of strong performances led to an 33-24 OPRF win and their third straight Class 3A dual team state championship. 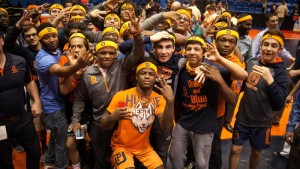 OPRF wrestling coach Paul Collins reflected on the mental strength required of Garner to be able to pull through for the team. “The fact that he even showed up and decided to wrestle … went out there to beat a tough opponent – that’s something that’s much bigger than wrestling, much bigger than high school athletics, much bigger than anything else,” said Collins.

Garner appreciated being able to lean on his teammates through this tough time. “Every time I’ve fallen, someone is there to pick me up,” said Garner.