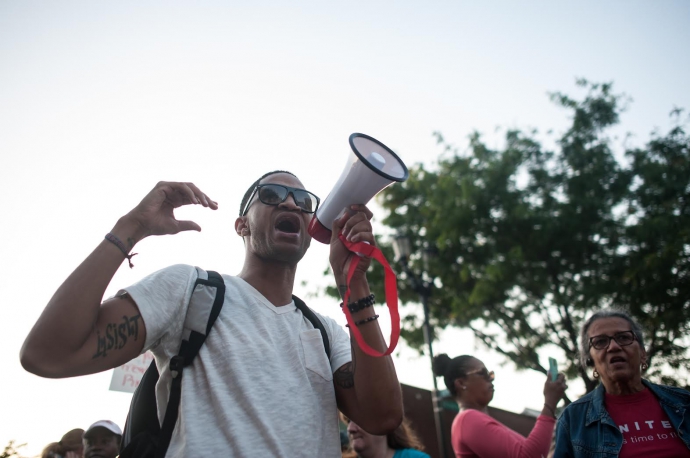 “You can’t be neutral,” said OPRF High School teacher Anthony Clark during a July 16 peaceful protest against racism and discrimination. Clark believes when it comes to equity and peace, there is no room to be neutral. The protest labeled “March to Madison” began at Oak Park River Forest High School and made its way to Madison Street, right outside the Forest Park Music Festival.

Clark was not alone in his efforts to draw more attention to the issue of remaining neutral in subjects of racism and discrimination. A diverse crowd of all ages and races took to the streets, including Eena Aikens, a 71-year-old Oak Park resident who said she marched in the Civil Rights movement decades ago. “My [black] grandson likes to ride his bike, and it makes me nervous,” she said in an interview with the Tribune. “When more than two kids are on bikes, it raises eyebrows in the neighborhood…I’m just being realistic.”

According to Clark and various other residents of the area, Oak Park, and the surrounding communities have seen its fair share of racism and discrimination. Oak Park resident Pem Hessing spoke about a recent incident she was involved in at a Forest Park bar. Hessing stated that she and her friends requested the DJ to play some 1990-era hip-hop. When the DJ refused their request, Hessing alleged that the DJ said he didn’t want to attract black people into the bar.

This incident sparked an idea with Anthony, as he began drafting a pledge for local businesses stating that they would do everything in their power to prevent racism and discrimination in their establishments. Although only 17 of the 40 local businesses signed Clark’s proposal, he made sure he would not ‘cast out’ the companies that did not participate.

The peaceful protest was an overall success, and the Oak Park Police Department was even commended for their cooperation in the event. “We’re happy to be here tonight to make sure everyone can deliver their message in a safe and effective way,” said Oak Park Police Cmdr. Joseph Waitzman.