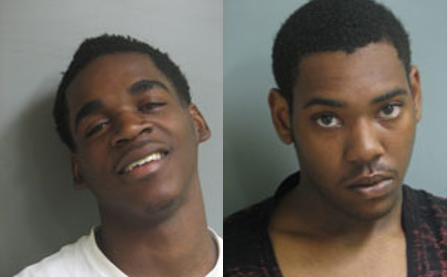 Two men and two juveniles have been charged in connection with highjacking a car from two senior citizens on the 700 block of North Grove Avenue in Oak Park, according to a news release from the Village.

The hijacking took place at roughly 5 p.m. on Thursday, April 7. A 71-year-old Oak Park man was sitting in the driver’s seat of his 2002 Oldsmobile with the engine running in the alley at the rear of his residence while his 67-year-old wife removed items from the vehicle. One of the victims told police that one of the suspects walked up to the driver’s door window, displayed a handgun and demanded the car, according to the news release.

The four assailants involved were arrested shortly after the hijacking following the actions of the senior citizen victims. After they called 911, police followed the stolen vehicle into a dead-end alley and captured the suspects on the 300 block of North Parkside Avenue as they tried to flee on foot.

“This couple did everything right. They didn’t panic, they didn’t resist and they immediately called 911,” said Oak Park Police Chief Rick Tanksley. “They also made it a point to retain details about their assailants that made it easy for them to make a positive identification. I think everyone can learn a lesson from how the victims handled themselves.”

Bond was set at $250,000 for Peters and Johnson. Their next court appearance will take place Tuesday, April 12. The two juveniles have been transported to the Cook County secure juvenile detention center.