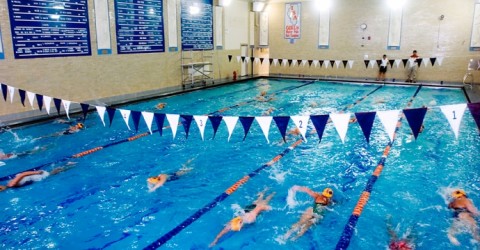 A multi-million dollar plan to build a new swimming pool at Oak Park and River Forest High School has attracted strong opposition amid a variety of issues.

For years, the OPRF pools have been in need of major overhauls. Built in 1926, they were only meant to last about 40-50 years. Yet, the pools have remained in use to this day.

“The pools are in use from 6 a.m. to 10 p.m.,” said OPRF Director of Communications, Karin Sullivan. “They are used by students, athletes, YMCA members, and disability groups.”

The problems in question have become, not if OPRF needs a new pool, but where to build it and how much it will cost.

To give you an idea of the scope of this issue, in just the last four years, eighteen plans have been proposed to the board and denied. Finally, one was accepted.

Last year, an idea was brought forth to tear down an existing parking garage. The plan suggested the new pool site would be at the corner of Lake St and Scoville Ave. The total cost would be $37.5 million. The plan would have taken $20 million from various funds and $17.5 million would come from non-referendum bonds.

Yet, both residents of Oak Park and business owners alike did not support the plan. They cited that the garage was very much needed for the community, which would face a substantial parking crisis without it. Due to backlash and strong opposition, the board met in January to make a decision.

“The board decided to withdraw its resolution to issue non-referendum bonds, so there was no referendum question on the March ballot,” said Sullivan.

Luckily, in April, three new plans were brought forth to the board.

The second plan is to renovate one of the two pools. In addition, the plan suggests demolishing the garage to build a second, smaller pool and a new garage nearby. Under this plan, there would be 325 spectator seats and 331 parking spaces in the new garage. The cost is estimated at $45.7 million.

The third plan once again considers the option of demolishing the current garage and building a new pool and a new garage in its place. Under this plan, the east and west pools will be re-purposed. Spectator capacity would be at 450 and the number of parking spaces would be 331. The cost is estimated at $42.1 million.

While the board was researching the details of the three plans above and the initial plan from last year to determine the best option, a fifth plan was recently brought to their attention.

The plan suggests building a new pool underground. Under this plan, the pool would be underneath the West Field.

According to Sullivan, “That proposal (referred to as 5B) is being vetted by Legat, the district’s architect of record, to ensure it includes all the elements deemed necessary in our program verification process last fall and included in options 1-4. Once that has been done, option 5B will be sent to an independent cost-estimating firm. We anticipate bringing forward 5B, with estimated cost, to the June 23 Board meeting for the board to determine whether to continue moving this option forward as a possibility.”

To learn more about the plans and see detailed blueprints of the proposed plans, go to OPRF’s pool project website.