Hotel workers in Chicago began their strike at 5:00 a.m. on Sept. 7 and have been seen outside many downtown hotels picketing every day since.

With no end in sight for the strike, Oak Parker Dima Ali decided to do something to support the workers. After starting a fundraiser on Facebook to supply lunch for those who are striking, Ali was able to raise over $300 in just 24 hours. The original goal for the fundraiser was just $100 and was far surpassed by generous donations from others.

On the Facebook post asking for others to contribute to the fundraiser, Ali proclaimed that actions speak louder than words. She clearly wasn’t alone in that sentiment, as evidenced by the outpouring of generosity. With the money from the quick fundraiser supported by many Oak Park residents, pizzas, soda, and gift cards to nearby businesses were dropped off to those who were out on the picket line on Wednesday afternoon. When delivering the food, Ali attached a note to one of the pizza boxes that said, “In solidarity from Oak Park”, letting the workers know that there were people standing behind them. 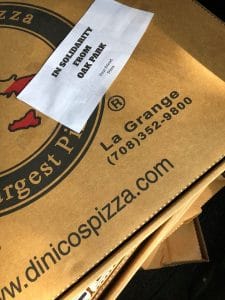 There are 30 downtown hotels affected by the strike, with all of their contracts ending on Aug. 31.  Each hotel negotiates their contracts separately, so some workers may be striking longer than others if resolutions have not been reached.  Hyatt put out a statement saying, “We are disappointed that UNITE HERE Local 1 has chosen to strike at this early stage. Hyatt and Local 1 are not at an impasse on any issue, and further negotiation sessions are set for this week.”  Hyatt also noted that they respect the right of their colleagues to voice their opinions. Hilton has released a similar statement noting their intentions to negotiate in “good faith” with the union. In the meantime, Ali and other Oak Parkers will be doing what they can to make sure the workers are eating lunch. 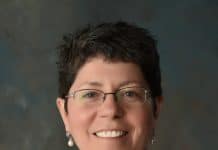 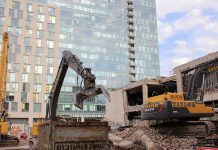 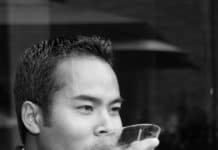